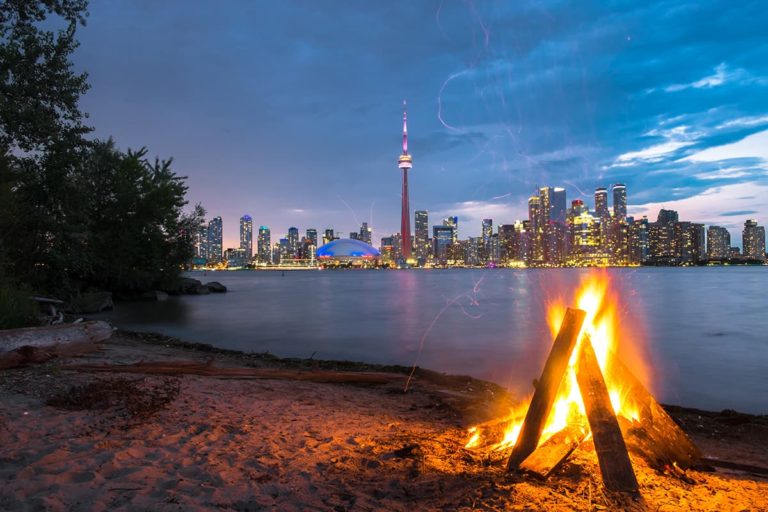 There are four official beaches on the Toronto Islands, spread out around the outside of the island, facing Lake Ontario (instead of facing the Toronto harbour): Ward’s Island Beach, Centre Island Beach, Gibraltar Point Beach, and Hanlan’s Point Beach (split into “clothing optional” and standard sections). Each beach is great for swimming, tanning, or relaxing. All Toronto Islands beaches are free to access (aside from the cost to use the ferry).

Three of the four (all except Hanlan’s Point) have received the prestigious Blue Flag designation, indicating top water quality, safety, and access.

Heavy rains and high water levels often create conditions which are not safe for swimming. The City of Toronto tests water samples from Toronto beaches every day and posts the results online. Lake Ontario has the second greatest average depth of any Great Lake, meaning it’s quite cold for swimming even during the hottest summer months.

Sand quality on the beaches is okay overall, though you’ll be quite disappointed if you compare to Caribbean destinations. The sand is somewhat coarse and dark, and some areas are littered with organic lake debris, as well as painful rocks and pebbles.

Lifeguards are on duty at every beach, every day during the peak summer months, from 11:30am to 6:30pm.

Around Hanlan’s Point beach you’ll find four washrooms, one changeroom, and one outdoor shower facility. The beach itself is about a 10 minute walk from the Hanlan’s Point ferry dock, and it’s the western most part of the Toronto Islands. From the shores of Hanlan’s Point beach there is a partial view of the western part of Toronto, including the Exhibition grounds, and the condo towers of Etobicoke, Mississauga, and beyond. It’s also the only beach on the island that has a decent (although not perfect) view of the sunset. Toronto “faces” the wrong way for sunsets, so the sun sets behind buildings rather than over the water. Hanlan’s Point beach is the most secluded and most sparsely populated of Toronto Island’s beaches, and is home to the city’s only clothing optional stretch of beach. 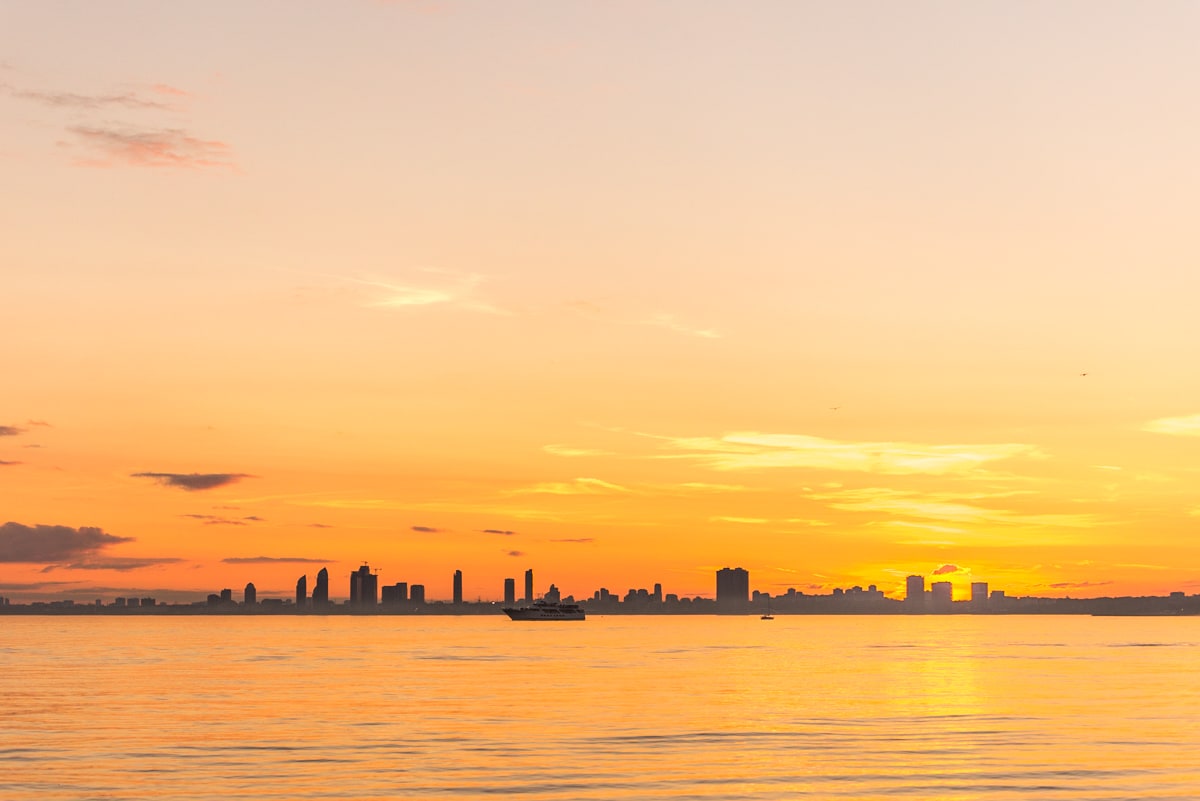 Hanlan’s Point beach tends to be less crowded overall than the other beaches on the islands, although during prime times (weekends) it can be quite a raucous party. During weekends, many boats will moor off shore and blast music to keep the party going all day.

When first entering the beach at its main entrance near the tennis courts, visitors will notice prominent signs indicating that the left (south) part of the beach is “clothing optional”. The right (north) part of the beach, which is much larger and stretches all the way to the island airport, is a standard beach. In practical terms, most people refer to the clothing optional section of the beach as the “nude beach” even though there is no requirement to be nude (despite what some people may tell you). Additionally, even though there is a signed division between the two section of beach, it’s not uncommon to see fully or partially nude beachgoers wander over to the other side, often going for long walks along the shore to the very end of the beach.

Visitors will also notice signs prohibiting photography, which may not actually be legally enforceable since it’s a public place with no expectation of privacy, but we’d recommend keeping your camera out of sight unless you want someone to throw it in the lake.

Centre Island Beach is located on the busiest island and thus is the busiest beach with the most amenities nearby. It’s been used for public swimming since 1888. The walk from the Centre Island ferry docks to the pier at the end of the beach is approximately ¾ km (½ mi). There are food outlets, washrooms, change rooms, and lockers close to the beach. Additionally, beach wheelchairs are available for rent (for free!) at the Centre Island First Aid Station.

The beach faces south with a slight eastward tilt, meaning it gets a lot of direct sunshine throughout the day, and offers a wide panoramic view of Lake Ontario (with nothing else to look at). As one of many Toronto beaches with the prestigious Blue Flag designation, it’s been recognized as one of the top beaches in the world for water quality, safety, and access since 2007.

Because of a breakwater wall in the lake, the water here tends to be calmer and warmer than other places on the island, making it better for swimming. If you have kids, this is the beach to bring them to.

Gibraltar Point Beach is the newest beach on the Toronto Islands, having been created in 2007 and being awarded the Blue Flag designation that same year. It’s located on the southwest portion of the island, on the strip of land that connects Hanlan’s Point to Centre Island. The beach is named for the nearby Gibraltar Point Lighthouse. Behind the beach is a small collection of eastern cottonwoods and small sand dunes. The entire south shore of the Toronto Islands was once coated with sand dunes (which themselves were run off from the Scarborough Bluffs), but due to erosion and the construction of the nearby Leslie St. spit, the islands have been shrinking. 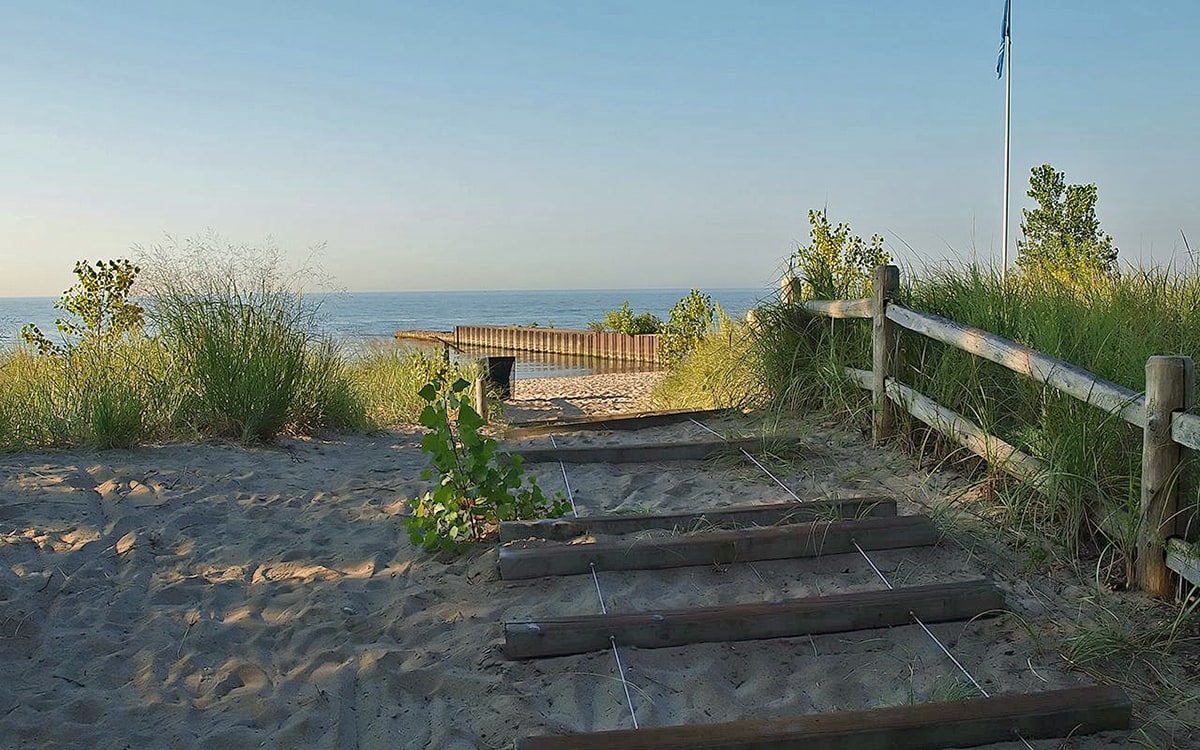 Because it’s still relatively new, you will find Gibraltar Point beach is often not labeled on online or printed maps, which also means it’s possibly Toronto’s quietest, least populated, and most secluded beach. If you want a nice beach experience minus all the people, head here. The beach is approximately a 1.8km walk from the Centre Island ferry dock, making it the furthest beach from any ferry terminal.

Ward’s Island Beach has the benefit of being the beach closest to any ferry terminal on the island. A short 5-minute, 400-metre (¼ mi) walk from the ferry dock is all it takes to get your toes in the sand. As yet another Blue Flag beach(since 2005), the beach boasts many amenities including washrooms and a nearby snack bar, not to mention a wheelchair ramp for direct beach access. It’s also the closest beach to the homes that make up the island’s year-round community. 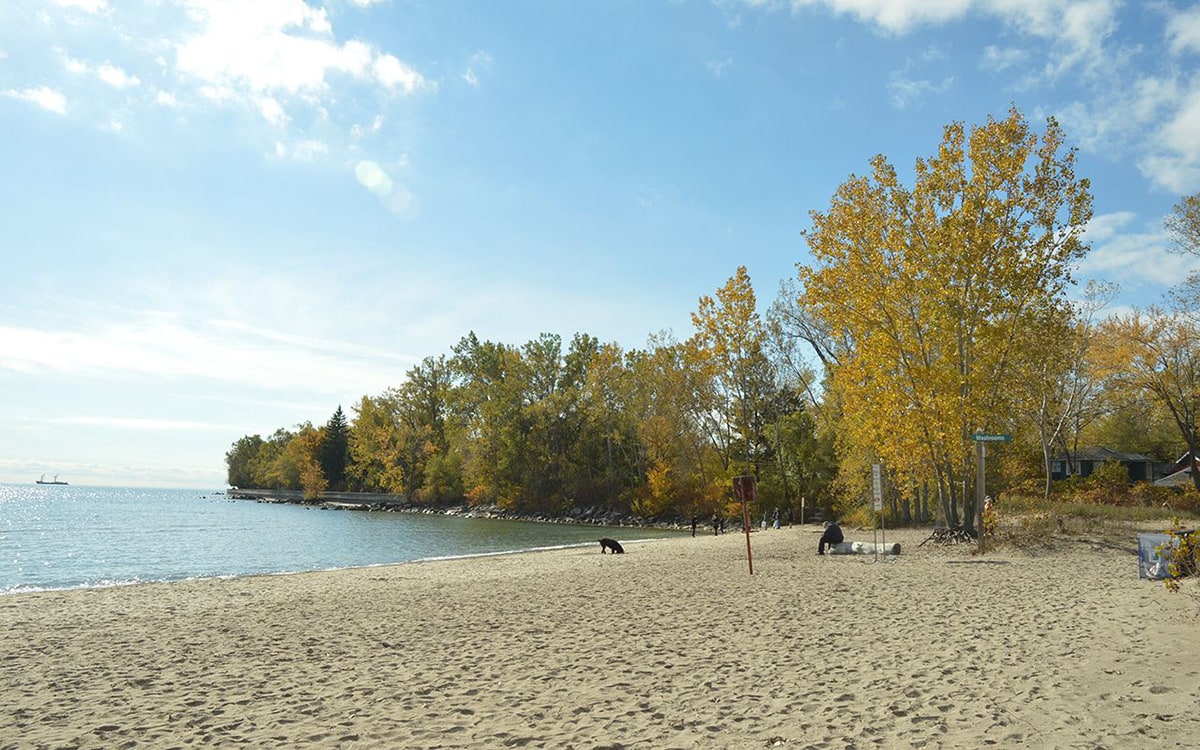 The water at Ward’s Island beach tends to be calm, since this portion of the island is somewhat sheltered by the nearby Leslie St. spit. You might even be lucky enough to find some beach glass, because of how the current operates.