What sort of activities require permits on the Toronto Islands?

Toronto is a pretty permit-happy place. You need permits for lots of different stuff, like getting married, taking pictures, having a BBQ, selling ice cream, drawing portraits, playing tennis, and just about every other mundane thing you can think of. Fines for not having the appropriate permits can be in the hundreds of dollars.

Can I go topless or nude on Toronto Islands beaches?

Although women in Ontario won the right to be topless in public in 1996, a city bylaw remains on the books that says appropriate attire must be worn in parks (and beaches count as parks). Will you get in trouble? Probably not. Toronto is a fairly liberal place and realistically no one will care.If you want to show off the full monty, a section of Hanlan’s Point Beach is the only “clothing optional” beach in Toronto and Ontario, and one of only two clothing optional/nude beaches in all of Canada. The beach is well signed so visitors won’t wander in by accident.

Yes and yes, with the appropriate permits.Whether you want your wedding ceremony or wedding photography performed on the Toronto Islands, you require a permit for either one. 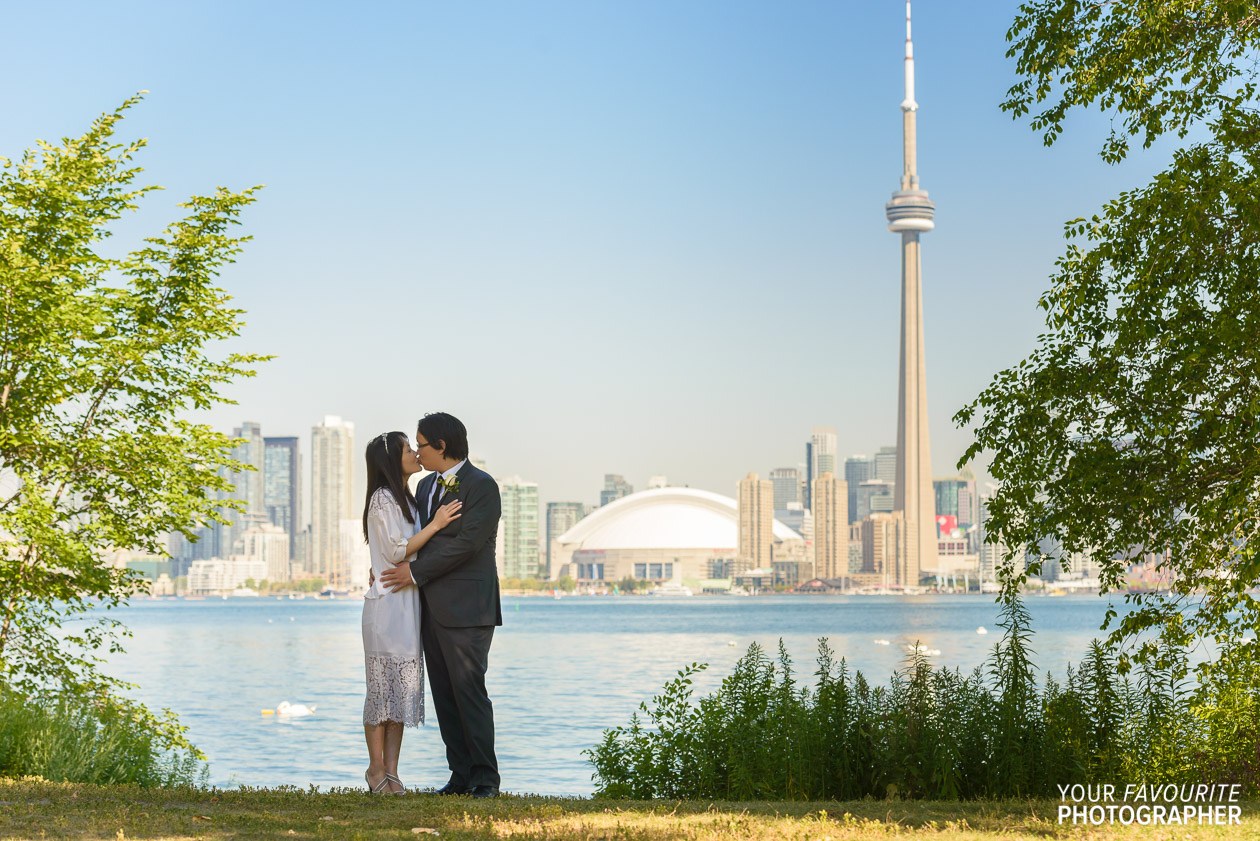 Are the Toronto Islands a good place to view fireworks on holidays?

Yes! Toronto has holiday fireworks twice a year, on Victoria Day (always the last Monday before May 25) and Canada Day (July 1).The biggest fireworks displays take place in Toronto’s east end Beaches neighbourhood, which means they’re best viewed from the eastern most portion of the Toronto Islands, on Ward’s Island.Harbourfront Centre, near the Jack Layton Ferry Terminal, displays fireworks on Canada Day which are best viewed from the north shores of Centre Island, Olympic Island, or Algonquin Island.

Where’s the best place to get an amazing photo of the Toronto skyline?

Anywhere along the north shore of Centre Island, Olympic Island, Algonquin Island, or Ward’s Island are your best bets. 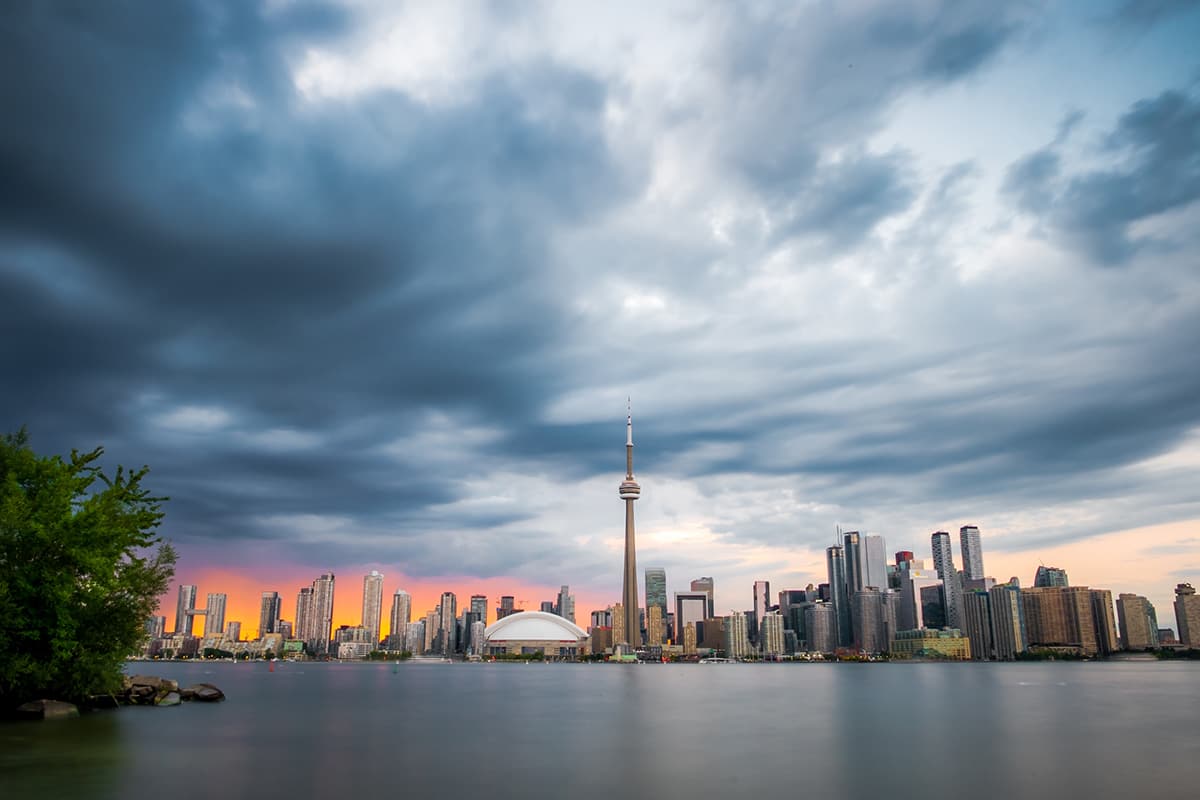 What kind of transportation can the ferries accommodate? Cars? Strollers? Bicycles? Wheelchairs?

Strollers, bicycles, and wheelchairs are all welcome on Toronto Islands ferries. Cars are not permitted on the islands. See the Ferry Information page for more details.

Can I access Billy Bishop Airport (YTZ) from Toronto Islands?

Nope! Although the Toronto Islands and the Billy Bishop Airport (YTZ) share the same land mass, there is no way to travel between the two areas. The airport is fenced off from the rest of the islands and requires separate transport. Access to the airport is provided via a pedestrian tunnel at the foot of Bathurst St.

Are the Toronto Islands dog-friendly?

Yes! However, your dog must remain leashed at all times as there are no off-leash dog areas anywhere on the islands. Dogs are not permitted on any of the beaches on the islands.

Can I have a BBQ / picnic / party / family reunion / big event on the Toronto Islands?

Yes, with the appropriate permits, you can have gatherings of 25 to 200 people. There are some restrictions on things like music, decorations, etc. See our page on Toronto Islands Restaurants, Picnics, & BBQs for more information.

How many islands are there?

How were the Toronto Islands formed?

Over many thousands of years, millions of tons of sand have eroded from the Scarborough Bluffs into Lake Ontario, where currents took the sand and deposited it in the Toronto harbour, forming a land mass. The oldest records show a 9 km (5.5 mi) long sand spit sticking out from the bottom of where Woodbine Avenue now is. That’s right, the Toronto Islands actually used to be connected to the mainland and weren’t islands at all!

Eventually that permanent connection was washed away by a storm in 1858 (after being previously damaged in 1852), permanently severing the connection to the mainland.

Unfortunately, the Toronto Islands are now at risk of eroding and eventually disappearing entirely. Thanks to the development of the Leslie St Spit (aka Tommy Thompson Park) to the east which blocks the currents, the Toronto Islands no longer grow in size like they used to. Lake Ontario now beats at the shores of Gibraltar Point, steadily eating away up to 8 metres (26 feet) of the island per year, and it could be severed in two in less than 20 years.

Do emergency services exist on the Toronto Islands? What do I do if I need police, fire, or EMS?

Do people live on the Toronto Islands? Can I buy a home there?

Yes! There are fewer than 300 homes concentrated in the east, on Ward’s Island and Algonquin Island. There’s a public school, a church, and some other limited amenities, though most residents have to travel to the mainland often. It’s not easy to live in one of these homes, however, as they’re only available as 99-year land leases from a Land Trust. What that means is that when a property becomes available (hardly ever), it can’t be listed for sale on the open market. On average, only three properties per year change hands, and the wait list is over 500 people long! Plus, you have to pay $110 just to join the list and $35 a year to stay on it.

What's the closest hotel to the Toronto Islands?

While there are no hotels on the island, the closest one on the mainland is located directly next to the Jack Layton Ferry Terminal: The Westin Harbour Castle.

Can I camp overnight on the Toronto Islands?

Some schools and youth organizations can get special permission to camp on Snake Island.

Can I have a campfire or bonfire on the Toronto Islands?

Yes! With the right permits, you can book a City of Toronto fire pit in various places around the Toronto Islands. The regular fire pit season is May 1 to October 30 each year.

What do I do if I missed the last ferry back to the mainland?

Some water taxi services run after hours service to get you off the island, although often at an added expense.

Can I swim to the Toronto Islands?

Hell no, you cannot. First, it’s an exceptionally long swim. Second, the Toronto harbour is heavily trafficked and you would die. Don’t do it.

Can I travel to the Toronto Islands in my own boat?

Are there yacht clubs and sailing clubs on the Toronto Islands?

Yes, there are a few: